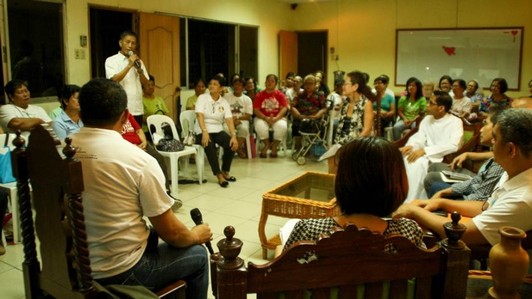 The month of April was a grace and blessing to all members of BEC. It was then when Rev. Arnel Pagaduan, SMM was given the task of guiding and focusing on BEC by our Parish Priest Rev. Fr. Richard Magararu, SMM. Fr. Richard felt the need of re-awakening each member especially, the pastols and facilitators, in order, to ignite again the desire of every cluster to vigorously participate in the activities. A “kamustahan” was held and was well attended; the main concerns were the problems encountered by each BEC cell, like the lack of participation from some mandated organizations and ministers prop up in spite of the calls made by our parish priest; perseverance in pursuing the members; as well as having several limitations.  Rev. Arnel reminded us to learn from yesterday and move forward for tomorrow. What matters is the now whatever struggles in the past, serves a purpose and gives us an opportunity to become better and attain the best.

The highlight of this kamustahan was the invitation from Archdiocese of Manila Ministry on BEC Formation and Promotion for 5 SPAM (5 Sabadong Pampatatag Malay Sa BEC) to be held at STa. Cruz Church in Manila. Our Parish Priest sent 8 participants headed by kuya Edwin, the Parish Pastoral Council Coordinator . The group already attended 3 modules and all of them already echoed in our parish. The Integral Faith Expression and the other two were echoed in a creative way. First, The D’ B@S (Deepening on BEC @ STP) which was patterned by ‘the buzz’ program of ABC-CBN. It was a mini-talk show format with our host Kuya Rodel as Tito Boy and Tita Tita as Kris Tita. It was highlighted in this show the deeper understanding of ‘Lay Empowerment.’ Then, the BEC Patrol which was outlined with the TV Patrol news. The module was ‘Karalitaan sa Liwanag ng BEC.’

It was a different approach and style laid down to all the pastols; facilitators; members of every cluster(s); mandated organizations and to the parishioners as well, for them to understand deeply the modules on BEC. The said activities were appreciated by all who attended and affirmations were given to all who organized the program. The next module to be echoed is now on going with its plan. In addition, some of the BEC Clusters are also visited by Rev. Arnel and some important activities of it were given apt response from the Parish Priest such as: the ongoing formation and meetings of the facilitators and pastols; visitation and even celebration of the anniversary of each cluster. All are doing their best to really give more attention and support, in order to strengthen the Basic Ecclesial Community (BEC) in the parish.