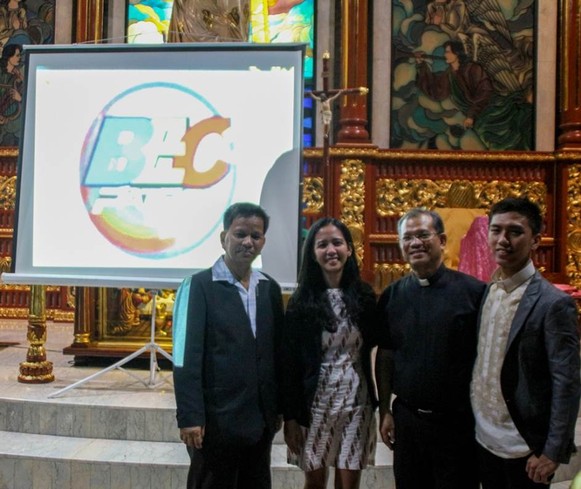 The visionaries of the BEC (Basic Ecclessial Communities) in Sta. Teresita Parish will not stop to awaken the lost and the sleeping spirits of their members. After the successful rendition of the talk show "D’ B@S", they were so inspired to continue creative ways to motivate everyone in the parish to get involved in this new way of being a Church. Under the supervision of our parish priest, Rev. Fr. Richard Magararu, SMM and his assistant, Rev. Fr. Angelo Pusikit SMM, Rev. Arnel Pagaduan SMM and some BEC leaders explored another television program to echo the content of the on-going formation given by the Archdiocese. It was decided that the style will be similar to news broadcasting and will be entitled "BEC Patrol".  This is patterned after a popular TV News Program called ‘TV Patrol’.  It aimed to report the current situation of the different clusters within the parish.

The program was hosted by Bernadette ‘Ariane’ Sebrano, Ted ‘Symon’ Failon and Noli ‘Val’ De Castro.  They were role played by our talented members of BEC who were trying to mimic the original hosts of the TV program.  There were also field reporters who are supposedly doing live coverage of the BEC clusters and conducting interviews.  Those who were interviewed were active members of BEC and giving their real life testimony as how they were touched by their active participation in the BEC.  The highlight of the whole program is the situation of poverty in the country and the search for answer to the question of poverty whether it is a blessing or a curse.  Kristian Villaruz took charge of the technical part especially the video and audio editing.

There was a live interview with Fr. Richard Magararu, SMM towards the end who happened to be the recently designated to be the priest in-charge of the BEC in the Vicariate.  He explained the importance of the BEC as thrust of the Philippine Church and as a response to the call of the New Evangelization.  He challenged everyone to be part of building true Christian community when there are no poor because there is sharing and real concern for each other.

The BEC Patrol show as a whole was applauded by the audience and the efforts of the whole production team under the directorship of Rev. Arnel Pagaduan, SMM were appreciated. A simple snack was served after the show.