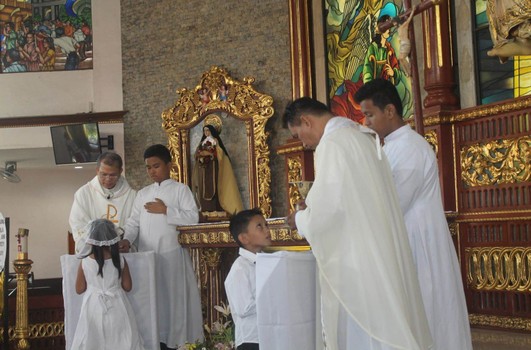 The Catechetical Ministry of Sta. Teresita Parish organized First Communion for the pupils of the three schools in the parish this school year 2015-2016.  For the first time, the Bloomfield Academy of Makati, a non-sectarian school requested that their qualified Catholic pupils undergo preparation so they can receive first communion. Forty three pupils finally made their first communion last September 12, 2015 at the Parish Church.  The celebration started at 2:00 o’clock in the afternoon.
The second batch was from West Rembo Elementary School.  This is the school situated just beside the church.  A total of one hundred thirty (130) pupils received first communion on October 10, 2015 at the Parish Church. The celebration began also at 2:00 o’clock in the afternoon.  The third batch was from Fort Bonifacio Elementary School, the second public school in the parish located just beside San Nicolas Chapel, the only chapel within the parish.  One hundred fifty eight (158) pupils joined this group and the event was also held at the Parish Church.  The celebration began at 2:30 in the afternoon.
The children attended three consecutive Saturdays for intensive Catechism on the Sacrament of the Eucharist and Sacrament of Reconciliation. This is a supplement from the Catechism classes given once a week by parish catechists in the public schools. Initial meetings for parents or guardians were conducted so they will know the requirements as well as the schedule of the activities.  Parents were also given catechism on the meaning of the sacraments and are reminded of their role and responsibilities as Christian parents. They have to be present also for the rehearsal of the liturgy. Few days before the actual celebration, the candidates went for confession for the first time.
The occasions were all successful and meaningful for both the kids and their parents. The parish catechists deserved congratulations for a job well done.  Fr. Richard Magararu, SMM, the parish priest presided the masess and was assisted by Rev. Arnel Pagaduan, SMM.  Fr. Angelito Pusikit, SMM also assisted in the distribution of the Holy Eucharist to the kids.